Skip to content
New Trustee for Village of South Jacksonville 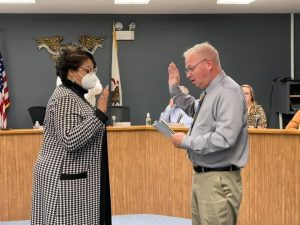 “The Village of South Jacksonville has a full Board of Trustees again and made history Thursday night after the first black resident to serve as a Village Trustee was sworn in.

Jackie Killion tossed her name in the ring for consideration for an open Trustee’s seat last year that eventually went to current Trustee and Finance Committee Chair Megan Davidson.

Killion says fellow Trustee Paula Belobradjic-Stewart had first suggested to her that she would be a good fit for serving on the board, and although she wasn’t appointed the first time, this time around the effort paid off.

Killion says she was driven predominantly to apply for the position, by a desire to serve her fellow neighbors.”